Do Cheetahs pose a risk to people? Let's be fair in our fears.....(Photo: 'Shadow' taken by David Swanepoel, Samara Private Game Reserve)

Posted by Corlia on Wed October 31, 2018 in Rogge Cloof Cheetahs. 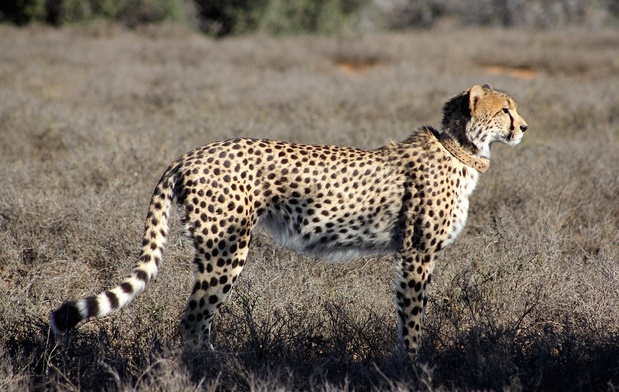 As the exciting arrival of Cheetah at Rogge Cloof draws closer and closer, it is not surprising that we have various  'Cheetah conversations' going on on various social media platforms.  One of the current conversations explore the topic of whether Cheetah poses any safety risk to guests at Game Lodges where Cheetahs roam free.

It is a well-recorded fact that Cheetahs are docile animals and do not pose a threat to humans. These beautiful cats are shy and will avoid direct contact with humans. Having said that, it is an equally well-recorded fact that any wild animal is dangerous and should be respected as such, especially when it comes to self-preservation.

Cheetahs are predators that do not eat other predators or even challenge other predators. Humans are not prey to Cheetahs and a human's height will also deter even an inquisitive Cheetah from approaching.  Being such a magnificent and impressive predator, humans often imagine the Cheetah to be a very strong animal, where in fact the Cheetah is slight of build and light, with a jaw which is not as strong as that of, for example a lion, or a hyena.  A Cheetah's claw structure also differs from other big cats in that their claws do not fully retract and their wrists are not very flexible, with the result that their claws are often worn down and not as sharp and dangerous.

Cheetahs don't take chances when hunting for prey.  They use their speed to outrun and trip their prey and then suffocate it with a bite to the throat.  Humans aren’t prey to Cheetahs. Plus we’re bipedal which will deter a Cheetah from attacking us. A Cheetah doesn't take risks, as an injured Cheetah (or any predator), is a dead Cheetah.

Reading about the current status of Cheetah in the wild (Cheetah Outreach - South Africa, www.cheetah.co.za and a recent study from the Zoological Society of London, Panthera, and the Wildlife Conservation Society), it is alarming that as at 2017, there were only about 7,100 cheetahs left in the wild.  Cheetahs are more than vulnerable...they are severely threatened!

So........maybe the question to ask is not whether Cheetahs are dangerous, but rather what we can do to ensure that there is a natural place for this absolutely unique and beautiful animal and to ensure their survival before it's too late.