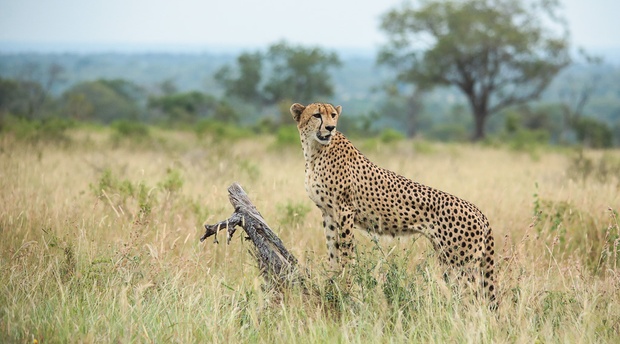 Dispelling Myths…. and big changes ahead!

We have big plans here at Rogge Cloof for the year 2018 and I am excited to share some with you. We are taking the next big leap into the process of rebuilding Rogge Cloof like it once was many moons ago. Animals, including the big predators, once roamed the Karoo freely until they were crowded out by us humans.

The story already began way back in 1991 when the current owners purchased the first piece of land from local sheep farmers. Since then, more and more land has been added and Rogge Cloof has grown to a sizeable 14500 ha.

Then there is also a whole host of smaller mammals, such as Meerkats and other mongoose species!
This is fantastic for the guests staying at Rogge Cloof, but with it comes its own challenges. One big challenge for us, as a fenced-in reserve, is how to manage the population of herbivores so that they do not cause environmental degradation, given that the animals can’t spill over onto other land.

An obvious choice presents itself straight away: culling, when the number gets too high. However, we treasure our animals and want them to get accustomed to the game drive vehicles, instead of running away because they have learned that vehicles can mean death.

While the actual release is only scheduled for the second half of 2018, I wanted to dispel some myths around the dangers of cheetah in case it makes people nervous.

The cheetah is part of the big cat family, and is therefore often lumped in the ‘dangerous’ category with its much larger cousins, leopard and lion.  However, while they are excellent hunters and deserving of the title ‘Big Cat’, they are fundamentally different.

Lions can work as a team to bring down large prey, and have incredibly muscular frames to wrestle prey much larger than themselves to the ground.  A large male lion can weigh over 200kg and can, in extreme cases, bring down a 600kg Buffalo on its own.

A leopard is a specialist at stalking prey and is potentially, pound for pound, the most powerful of the African cats, being able to lift an animal twice its body weight (a large male can weigh up to 90kg) into a tree to feed on.

Leopards have long, sharp claws and a powerful muscle structure. I once was lucky enough to be involved in a Leopard research project in Botswana and the vet in charge, when trying to push the needle into the leopard’s forearm, said, it was like trying to push the needle into a piece of wood.  They use that extreme muscle to overpower prey and crush the spine, usually with a bite at the base of the skull or to crush the windpipe in a suffocating vice grip.

The cheetah is extremely adapted. They are adapted to the extent that they went through a population bottleneck during prehistoric times. They were so specialised that they couldn’t cope with any environmental change; resulting in most of them being wiped out. We know this because the modern cheetah is genetically poorly diversified.

Cheetahs hunt using their supremely lithe and athletic body, reaching speeds of over 100km/h.  To reach these speeds, they need to reduce weight. Therefore, the head, teeth and jaws are smaller in comparison to its body size, than those of other cats.  Its claws are unlike the other big cats, in that they cannot fully retract and they are blunt. They act like sprinters’ studs, helping to get traction and grip on the ground when accelerating.

Most of the muscle on the body is along the spine, so that it can have hyper flexibility, to extend the reach of the extremely long legs and create that formidable speed.

A male cheetah may weigh between 60 and 70kg. They rarely hunt anything larger than a springbok and usually rely on a short intense sprint to trip their prey and to subsequently suffocate it.

Cheetahs don’t see humans as prey and will run away from any conflict in the wild given that any injury can mean death.  A human being, standing on two legs is very intimidating and unfamiliar to a cheetah. It would only really feel threatened if cornered…not easy to do in this wide-open Karoo landscape.  Children, as long as accompanied by parents, are also safe as long as they stay close to the parents out in the veld.  The general noise and commotion of a homestead is enough to keep cheetahs away from them.

To my knowledge, there have only been two recorded fatalities from cheetah, and both were in captivity. These attacks occurred with animals that were routinely handled and so had lost their fear of humans - something we want to avoid by limiting our interactions with the cheetah. We will never ever let anybody pet, play with, or interact with the cheetahs that come to Rogge Cloof in any way.  Neither will they be allowed to jump on vehicles, something that has been made popular by the media. To me, this is unethical guiding behaviour.  Do not be fooled, it is never appropriate to allow any wild animal to jump on an open vehicle, the risks are too great.

Basically, what I’m saying is that with a little knowledge, it’s easy to see that these are magnificent creatures that are not at all dangerous to people, if given the proper respect and space.  They do not possess the strength, or weapons to even think about harming a person, unless we do something to endanger its life first.  So, although it’s a big change to the area, and something that is quite extraordinary, please, come and visit us to see just how wonderful this could be.