Posted on Mon January 8, 2018 in Wildlife: Game, Reptiles and other beauties. 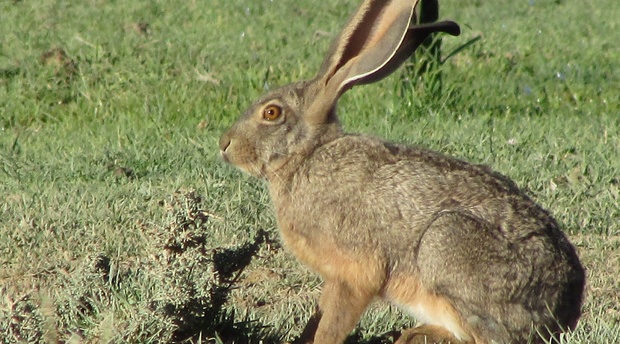 The Cape Hare is a large species of Hare, reaching almost 3.5kg, that is very well adapted to living in arid environments and can be found across Africa. Mostly being active at night, having very concentrated urine, incredible camouflage and being able to drink water more salty than most other Hare species, means that it can live in the driest of areas.

Interestingly, like most hare species, they have developed a habit of re-ingesting their droppings in order to derive the maximum nutrients. Usually the droppings deposited in the morning, after an evening of foraging are re-ingested to help cope with the long period spent hiding from the high day temperatures. When next here at Rogge Cloof, look amongst the bush, especially near the rocky areas, for their pellets (roughly the size and shape of Smarties). If very pale, you know these have been ingested twice, if more green in colour, these have only been digested once.

Though very successful breeders, sometimes producing litters 8 times a year, very few will reach maturity, due to predation from snakes, jackals, caracal and many of the larger eagles, such as the Martial and Verreux Eagles. The young may even be taken by Eagle Owls.

When you next visit us, look out for the Cape Hare and enjoy its antics in the early mornings and evenings.