An Introduction to Salpeterkop Volcano, by Dr. Mike De Wit 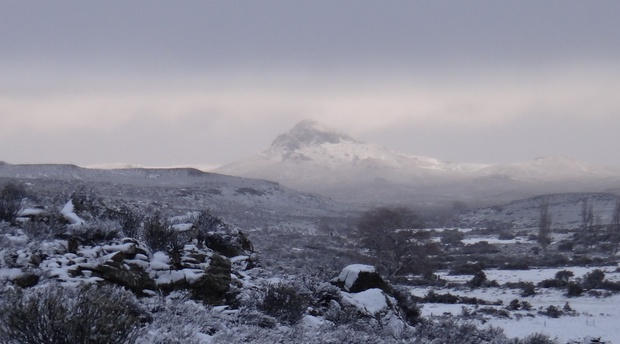 "The extinct volcano Saltpeterkop, which erupted some 66 Ma ago with great force, has been remarkably well preserved on the farm Blauwbloemetjes Keep 95, some 20 km east-southeast of the town of Sutherland. In fact it is the best preserved volcano in South Africa. Saltpeterkop forms part of what has been referred to as the Sutherland Suite of alkaline rocks (rocks in which the chemical content of the alkalies, K-oxide and Na-oxide, is great enough for alkaline minerals to form), an igneous province composed of a range of volcanic rock types such as olivine melilitites, carbonatites and trachytes of roughly similar age (Rogers and Du Toit 1903, De Wet 1975, Kent 1980, Verwoerd et al. 2006, Marageni 2018). Some of these occur at the Sutherland Townlands directly west of the town, at Silver Dam nearly 3 km west-southwest of Saltpeterkop, and as small occurrences on the farm Blaauwbloemetjes Keep. The volcanic rocks of Saltpeterkop itself have been referred to as trachytes (a fine-grained volcanic rock consisting largely of alkaline feldspar), while a later phase of volcanism introduced carbonatites which are mainly found within the southern part of the crater and as dykes in the immediate vicinity

The Saltpeterkop peak, called ‘Old Sneeuw Kop’ (photo) on the historic Divisional maps (Rogers and Du Toit 1903), is a remnant of the summit tuff ring structure that occurs at the northern edge of the large crater and is composed of coarse breccias and tuffs that were blown out of the crater and deposited as a cone surrounding the crater. The crater is some 900 m in diameter and this large basin filled with finer material after the cessation of the volcanic activity.

Most of the components of the Sutherland suite, including several volcanic necks in the vicinity, were first described just after the second South African war by Rogers and Du Toit (1903, 1904), who also produced the first geological map of Saltpeterkop (map). Whether those volcanic necks proximal to the Salpeterkop crater, are all separate vents or rather remnants of an ejecta blanket of pyroclastic breccias deposited during the eruption of the volcano will be discussed.

Prospectors were attracted to the area soon after the discovery of diamonds in Kimberley in 1869, because the olivine melilitites in the Sutherland Suite were believed to be similar to the Kimberley diamond pipes (Verwoerd et al. 1995). The volcanic pipes that produce diamonds, such as the Kimberley mines and Cullinan Mine near Pretoria, are called kimberlites and are cousins to the olivine melilitites and the carbonatites. Many were explored and excavated for their diamond potential, and although these excavations were described by Rogers and Du Toit (1903, 1904), they have long been filled in. De Wet (1975) suggests that the origin of the name ‘Saltpetre Kop’ might be due to the biogenic saltpetre in the form of an efflorescence on sheltered walls of shallow caves. These white powdery deposits are mainly confined to the tephra rim on the northern side of the crater."

Rogers A.W. and Du Toit A.L. (1903). Volcanic Pipes of Sutherland. In: Geological Survey of parts of the divisions of Ceres, Sutherland and Calvinia. Annual report of the geological commission of the Cape of Good Hope 1903, 43 – 67.